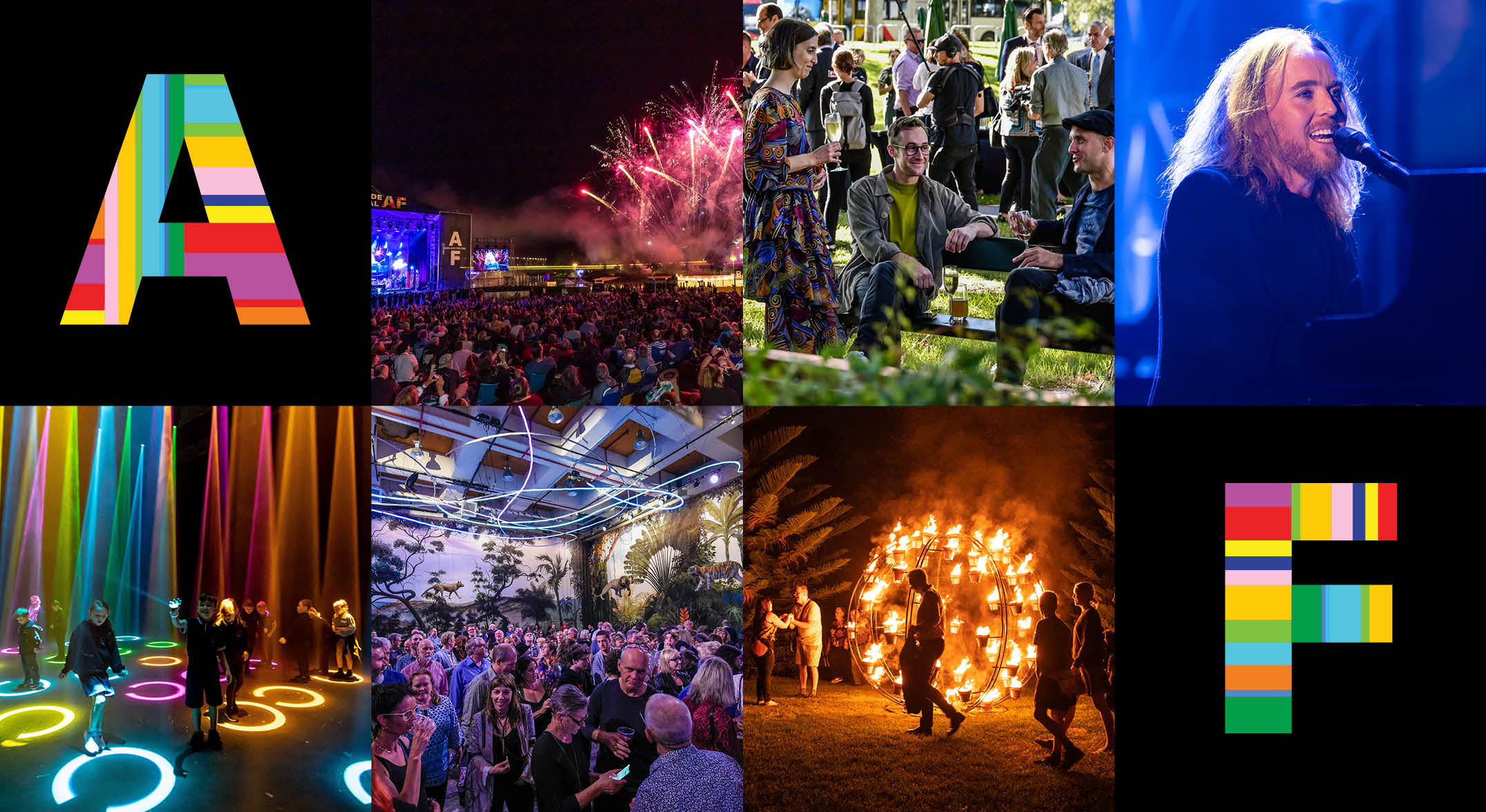 The 2020 Adelaide Festival curated by Artistic Directors Neil Armfield AO and Rachel Healy has seen a triumphant 17 day event unfold with sold out shows, the biggest schools program in Festival history and box-office success. With two days still to go the Adelaide Festival has increased its total audience attendance by 24.8%, has smashed its box office target (of $4.7 million) and generated the second highest box office in the event’s 60-year history, so far achieving a total box office income in excess of $5.3 million, a 13% increase (figure is inclusive of umbrella shows, but does not include WOMADelaide).

A total audience of more than 390,000 have attended Adelaide Festival events (including WOMADelaide). The Festival has sold 81,446 tickets across 73 events, a 13% increase on 2019, with several shows still to run across the closing weekend.

Audiences of more than 114,000 attended free visual art exhibitions at the Art Gallery of South Australia for the Australian Exclusive, Monster Theatres, which marks the 30th anniversary of the Adelaide Biennial of Australian Art, the 150 Psalms Exhibition at the Adelaide Festival Centre and Adelaide//International at Anne & Gordon Samstag Museum of Art. This figure also includes Japanese artist Tatzu Nishi’s A Doll’s House in Rundle Mall, the FREE 60th Birthday Concert with Tim Minchin, as well as Breakfast with Papers and Festival Forums which were free to the public at the Festival Centre’s Star Kitchen & Bar.

The Adelaide Festival schools program was the biggest in the Festival’s history with a 143% increase in ticket sales compared with 2019. 4,806 tickets sold to a total of 77 different schools across South Australia including 4 Aboriginal and Torres Strait Islander schools and 2 tertiary institutions (NIDA students who travelled from Sydney and The University of Adelaide Creative Arts students). The most popular shows were The Lighthouse by Patch Theatre (1,113 tickets sold), Buŋgul (581 tickets sold) and The Doctor (552 tickets sold).

There were also numerous opportunities for direct engagement between students and Festival artists including workshops, master classes and Q&A sessions, a highlight being the Q&A session for University of Adelaide Creative Arts students with Tim Minchin.

Corporate growth and philanthropic support have again contributed to the success of the festival hitting all targets in 2020.  Through the generosity of the Balnaves Foundation, the Pay What You Can and Tix For Next to Nix programs meant that over 1,000 people who are at an economic disadvantage had the opportunity to attend Adelaide Festival flagship productions.

Director of Adelaide Writers’ Week Jo Dyer oversaw her second Festival kicking off with a sold-out Opening Event ‘The Only Constant’ featuring Chigozie Obioma, Sanam Maher and Tyson Yunkaporta. Writers’ Week attracted capacity crowds to the Pioneer Women’s Memorial Garden from February 29 to 5 March, where 115 authors from Australia and around the world featured across the six days of free open-air readings, panel sessions and literary conversations exploring the theme Being Human. The book tent broke festival records taking over $406,000 with the best seller across the week belonging to Bart van Es with The Cut Out Girl. Special mention to Yanis Varoufakis who had two books in the Top 10 bestseller list, and three in the top 15.

The 2020 Adelaide Festival still has a number of exciting shows leading into the final weekend including the Australian premiere of Missy Mazzoli’s powerful opera Breaking The Waves based on Lars von Trier’s unforgettable 1996 film, with the Scottish Opera, soprano Sydney Mancasola, Australian baritone Duncan Rock and Irish soprano Orla Boylan. Lloyd Newson re-examines his ground breaking 1996 Festival work Enter Achilles for a new audience, 24 years after it was performed in the Festival. The Illiad – Out Loud will play down at the Scott Theatre and sees William Zappa’s wonderful adaptation of Homer’s epic poem in three parts with a total runtime of nine hours-a truly epic event. Over four magical nights Adelaide’s Botanic Garden will play host to French artistic collective Compagnie Carabosse as the Fire Gardens installation creates a mesmerising firelight in one of Adelaide’s favourite spaces. From opposite sides of the globe all female crew Lady Rocks from Paris will perform with Sydney’s Riddim Nation in Two Crews showcasing the best of hip hop culture in the Space Theatre, and Thom Monckton will have audiences laughing at his wildly chaotic antics in The Artist. Combining theatrical intimacy and personal testimony Aleppo. A Portrait of Absence takes storytelling to a new level at the Queen’s Theatre. Lisa Gerrard & Paul Grabowsky, and Didirri will all be performing in the Adelaide Festival’s unique contemporary music venue The Workshop over four nights. This weekend is your last chance to see some sensational shows that have been thrilling audiences, including Traverse Theatre Company’s Mouthpiece and the interactive virtual reality experience Eight. Grab your morning coffee and join us at Breakfast with Papers and catch our last Festival Forum for 2020!

Executive Director Rob Brookman said: “We have not seen audiences shying away from attending our performances and events – and have in fact seen an acceleration in sales over the last week of the Festival. These have been challenging times in which to mount a major public event and we have felt acutely conscious of the level of trauma and uncertainty from recent horrific bushfires to the COVID-19 pandemic that is unfolding in new ways every day. We are grateful to have tip-toed around a situation that, while extraordinarily difficult and disruptive, could have instead so easily resulted in cancellation. We feel deeply for our colleagues across the arts and cultural sector as they face down cancellations or postponements of performances, festivals and tours. We have been astonished by the resilience of our community and like to think that the Festival has provided many people with a kind of cultural anchor in uncertain times.”

Joint Artistic Directors Neil Armfield AO and Rachel Healy said: “Today is day 15 of 17, we are heading to the end of what feels like one of our most successful Festivals – not only because of sales and attendance metrics but because of the buzz in the air, the conversations in foyers and bars, on the streets and on social media, the palpable sense of occasion, of ideas, of creativity and of a sense that what’s on stage is reflecting the issues and ideas and debates of contemporary life. We are especially proud of the 9 works which were commissioned by Adelaide Festival, Australian works included Buŋgul, The Lighthouse and Two Crews, whilst internationally commissioned shows were Requiem, Breaking The Waves, Enter Achilles, Dimanche, A Doll’s House and four separate works by four female composers for 150 Psalms.  It is indeed the work, creativity, virtuosity and imagination of the artists and companies that is the bedrock of everything we do and indeed why Festivals exist at all.

Works like Requiem, The Doctor, 150 Psalms, Mouthpiece, The Sound of History, Buŋgul and Fire Gardens have had a huge impact on 2020 audiences, selling out, providing sublime moments of joy and provoking important conversations about the challenges and ethical issues of our times."

Adelaide Writers’ Week Director Jo Dyer said: “This year’s Writers’ Week saw an impressive and erudite array of authors from across Australia and the world descend on the Pioneer Women’s Garden for six informative and entertaining days of discussion and debate.  Neither the occasionally inclement weather nor latest rumours of Coronavirus deterred audiences, who turned out in large and enthusiastic numbers from the first Kids’ Day session on Saturday morning, to the moving and luminous addresses of the final Twilight Talk on Thursday evening. Authors were again overwhelmed by the size and generosity of Writers’ Week audiences, commenting particularly on their engagement, commitment and intelligent questions. It was a stimulating week full of inspiring sessions for authors, audiences and organisers alike.”

Sold out shows and events:

Sold out shows at The Workshop:

Umbrella Shows in the 2020 Adelaide Festival