The 1992 Adelaide Festival was held from Friday, February 28 to Saturday, March 21, led by Rob Brookman.

The 1992 festival was well in tune with the times: the planned focus on theatre and music from eastern Europe turned into a celebration of that region's political reform; South Africa's landmark decision to move towards the abolition of apartheid coincided with the opening performance of Serafina!; Womadelaide anticipated a large and unsatisfied national interest in world music; and the substantial increase in the range and number of free outdoor activities found enormous favour with those sections of the community perhaps worst affected by the continuing recession.

Festival highlights included large-scale events such as Nixon in China, Peter Schreier and the Adelaide Symphony Orchestra's superlative performance of Bach's St Matthew Passion, Maguy Marin's May B and Cheek by Jowl's masterful As You Like It. 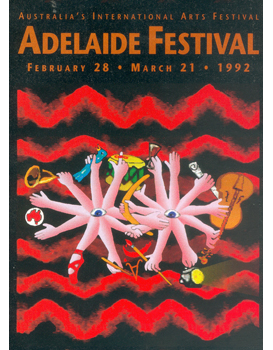